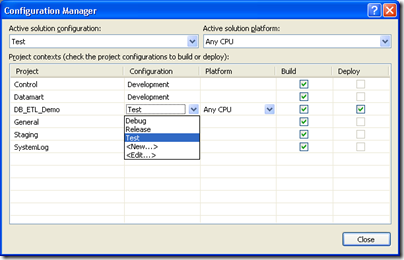 Deploying a database project to multiple environments can be challenging. Especially when all target machines are not equal; that is, their files are not stored in the same folder, the various database or server objects differ.

One configuration for each environment (DEV, Test, Production)

Configurations used for database deployment may be different than those used for software deployment. Simply create as configurations as necessary. For example, in my solutions, I always a configuration named "Development" for my own machine, "Test" for test server and "Production" for the production server.

Once configurations are defined, we can set my DBPro project accordingly.

Some files contain project's properties. They are located just below the project:

If we bring the project's properties screen (right-click project and select properties), we can create or update files as needed by the selected configuration. A properties file can be used by several configurations.
for different server and database objects.

MSBuild enables us to deploy the project by using the command line. To be able to use MSBuild easily, open the visual studio command prompt from the start menu–> Visual Studio 2008:

Here is a common syntax that can be used to deploy a database project:

So, the resulting command line is: 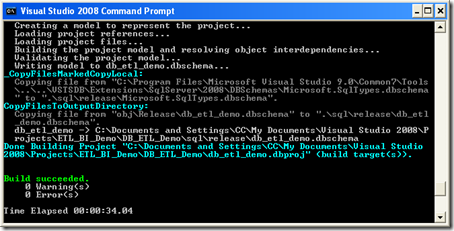 Now the project has beeen built. A DB_ETL_DEMO.dbschema file has been created. We can now deploy the dbschema file to our target database. The command line syntax is:

The file db_etl_demo.sql is now created in the test folder of my project:

Refer to "An Overview of Database Build and Deployment" in DBPro documentation. It contain lots of sample to use MSBuild in conjunction with DBPro.

This article demonstrated how a database project can be deployed using Visual Studio configurations and MSBuild command line. MSBuild is installed by Visual Studio and is very convenient when DBPro projects have to be deployed to servers or machine where the database does not have similar setup. Also, since this is a command line tool, it can be wrapped into a scheduled task in order to automate database deployment at specific intervals. In another article, I will talk about TFSBuild, the build feature that comes with Team Foundation Server.